Lady in the Lake

Lady in the Lake is the first episode and season premiere of Season 2 of The Listener.

Toby helps a woman with amnesia regain her memory, which includes some unsavory corporate behaviours. But his actions draw the attention and suspicions of Sgt. Michelle McCluskey at the IIB.

Scene opens with Toby riding on his motorcycle to meet Oz talking to the audience about his gift and how he is using to help people. Oz is collecting bets on Toby winning all the chess matches as Toby wins match after match. Oz closes up the match and Toby gives their winnings to charity. In the ambulance Oz tells Toby he could make a fortune using his abilities, but Toby tell Oz it's not his style. Then they get a call about an unconcious woman found by a lake, and the two head to the scene. When they arrive, Oz reminds Toby not to run, but then the woman wakes up and Toby jogs up to her and picks her up in his arms.

Back at St. Lukes, Oz is retelling the events at the side of the lake to the other paramedics, and Ryder walks in telling Oz he broke the rule about running. Olivia walks in and asks for Toby, leaving Oz to finish cleaning the truck and at Ryder's mercy. Olivia asks Toby to use his abilities to see if he can pick up anything from the woman, but Toby points out that he can't read thoughts she doesn't remember she has. With Oz and Ryder, Ryder informs Oz that he would receive a accommodation for his efforts. Oz is shocked and Ryder points out that Oz will need a speech. Sandy brings out Ann to Olivia and Toby, and attempt to jog her memory by asking her questions. Toby reads that she was in the water, asking for help, and Toby tells Olivia about it. Dr. Shane Lawson walks in mentioning he was called about the case with Ann, and Olivia takes him to Ann. Sandy teases Toby about Olivia and Shane.

In the ambulance bay, Toby and Oz are stocking the ambulance and they talk about Ann. Oz asks if Toby is going to get involved despite Toby saying he wasn't going to get involved. Espically since the death of Charlie Marks and the disappearance of Toby's mother. Toby thanks Oz and mentions he isn't going to try and save everybody. Later in the evening, Toby, Oz and Olivia are hanging at a bar, and Olivia asks Toby to keep trying with Ann when Shane walks in and he tells them that there is no damage to Ann's brain. The memory loss is temporary. Elsewhere in a office, a man calls another man called Martin, about Ann who had shown up at the hospital and Martin says he will finishes her. Martin visits the hospital and Sandy notices him and immediately becomes suspicious.

Out on the streets, Oz talks to Toby about the accommodation and how it was an intern paramedic who did it, even though he wasn't qualified. Just as they pull in to the hospital, they notice Ann outside and Ann mentions that she needs to get away. Toby gets a read of someone trying to kill her and Toby tells Olivia someone tried to kill Ann and to get Ann some security. At a hotal, Michelle and Dev exit an elevator to search a hotel room for Lynn Kendal, but no sign of her. Dev finds a ferry boat schedule though. Elsewhere Toby take Ann back to the scene of where she was found to see if she remembers anything. She remember hearing the ferry, and Toby reads that she was on the island and they head there.

At the docks, Michelle talks to a ferry boat operator about Lynn and tells him to call her if he sees Ann again. At an office a it guy,Roman Przyblanski gets a meeting with someone about an environmental report being altered. Roman points out that he got it from a dead scientist Steven Murchin, and it was on his hard drive, and Roman blackmails the guy with information he has. At a cafe Michelle and Dev are watching surveillance footage and Dev seeing Lynn going on the ferry. Toby and Oz take Lynn on the ferry and ferry operator contacts Michelle about the sighting. Toby, Oz and Ann walk around the island to see if Ann remembers anything, so Toby decides to head to the cafe. Martin arrives on the island and calls the man he found her with two men, but the man calls Martin back to deal with another issue.

At the cafe, Ann still can't remember anything until the glass broke and Ann remembers something. A woman yelling at her and a man telling Ann he can't protect her. Ann wants to leave and they head back to the mainland. Then Toby notices a woman from Ann's memory when the IIB walks in and informs Ann/Lynn that she is wanted for questioning in the murder of Steven Murchin. Toby to talk them out of it, so the woman orders to bring them all in. At IIB Michelle informs Alvin that Lynn can't remember anything and Alvin comments it not going to help Michelle build a case. Alvin asks about Toby and Oz in the office and Michelle points out that they're paramedics that were with Ann. Michelle returns their stuff and tells them they are free to go and Toby tells Michelle about the woman on the island who migh have a connection to Ann. Oz talks to Dev and asks him what IIB stands for. Michelle gives Toby her card to call her if he has anymore insights and Toby leaves informing Oz to cover for him.

At a park, Roman meets with the man and makes the exchange. As the man leaves and Martin runs by and poisons Roman and kills him. In the interrogation room Michelle is interrogating Lynn/Ann about her company and their involvement with Steven Murchin. Michelle reveals that Steven's brakes had been tampered with and that there was a report he wrote about enviromental issues. On the island, Toby goes to talk with Sandra Murchin about Lynn and mentions she was nearly killed after visiting Sandra. At IIB, Michelle continues her interrogation of Lynn and Lynn's connection to Jerry Morrow and Northern Superior. Michelle reveals that Lynn is a corpoate fixer and shows her a picture of Roman, who was murdered. At the island, Sandra reveals Lynn had come to the island and had come seeking help proving that the company that murdered Steven was dirty. She also reveals that Roman had come 2 days after for the computer, and Toby telling Sandra to go to the police. Elsewhere, Michelle shows Lynn the footage and she spots Martin, and points out he tried to kill her.

Michelle tells Dev that Alvin wants her to either charge Lynn or let her go as they look for the man on the video. The computer finds no match, but Michelle is informed that Toby has returned with a the woman he was talking about it. Dev takes Sandra to the conference room and Michelle tells Toby to stick around. Toby walks over to Lynn and tells her that woman was Steve's wife and that she was going to tell the IIB Lynn was going to expose the company. Michelle is suprised at how willing Sandra was at giving information, so the make a plan to use Lynn to lure out her boss while wearing a wire. During the stakeout, Dev notices that Toby is on scene and Michelle confronts him on what he's doing. Jerry arrives on scene, and as they are talking Toby spots Martin. The IIB moves in and grabs him and Jerry.

Michelle is curious on how Toby knew Martin had the needle and tells Toby she needs a statement. As Toby leaves, Dev meets up with Michelle and wonders how Toby knows all this, but Michelle intends to find out. In the ambulance bay, Ryder talks to Oz about his speech, and tells Oz to be proud of it. Oz asks Ryder for his partner on that call to come up with him on the stage, and Ryder agrees. At IIB, Toby meets Lynn talking to about what happened and asks what going to happen next. Lynn thanks Toby and he wishes her good luck.

At Toby's Olivia, Oz and Toby celebrate Lynn getting her memory back. Olivia mentions that Lynn has someone waiting for her in Calgary. Olivia is also proud of Toby for getting involved, and mentions Charlie would have been proud. They toast to Charlie. 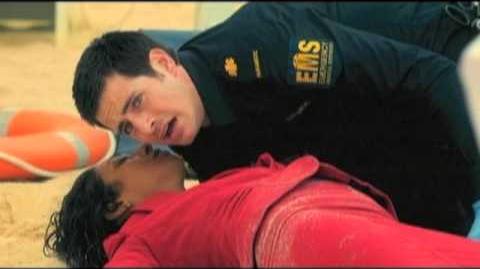 The Listener Ep. 201 "The Lady in the Lake" - Exclusive Clip
Community content is available under CC-BY-SA unless otherwise noted.
Advertisement