Start a Wiki
She Sells Sanctuary is the sixth episode of The Listener of Season 3.

Toby and Michelle investigate the link between a cult and the disappearance of three young women.

When a third young woman is snatched from a bus stop on the outskirts of the city, the IIB takes over for Metro. With a cult-like religious order in the area, and the most recent victim a member, Michelle and Toby visit the commune to meet with its leader Mitch Deerfoot. The disgraced philosophy professor tours them around the compound and explains members are chaste and shun modernity. Michelle thinks the set up is extremely creepy, but Toby finds a calming connection to the dazzling, colourful thought patterns of the followers. Meanwhile, Oz is unsettled when he gets a new shift partner, the very attractive and attentive Elyse (Rachel Skarsten). He soon finds himself questioning his one-sided commitment to his girlfriend Sandy, who's working in Africa. As Toby and Michelle pursue leads, a few people of interest emerge including Deerfoot... 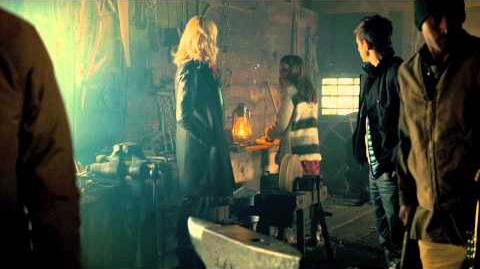 The title of this episode alludes to She Sells Sanctuary by The Cult. It is from the 1985 album Love.

Retrieved from "https://thelistener.fandom.com/wiki/She_Sells_Sanctuary?oldid=4911"
Community content is available under CC-BY-SA unless otherwise noted.